Row over immersion of idols in Hyderabad Hussain Sagar lake 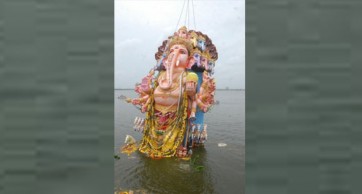 Hyderabad, Sep 6 (IANS) Hyderabad police on Tuesday foiled an attempt by Bhagyanagar Ganesh Utsav Samiti to take out a bike rally to oppose what it calls restrictions being imposed on immersion of idols of Lord Ganesh in Hussain Sagar lake.

Three days ahead of the immersion procession, the Samithi leaders tried to take out the rally around the lake in the heart of the city.

Since there was no permission for the bike rally, police stopped the participants and took them into custody. They included General Secretary of the Samiti, Bhagavanth Rao.

There was mild tension on Tank Bund when Samiti leaders and workers gathered there to take out the bike rally. When stopped by the police, they raised slogans and tried to resist arrests.

Samithi, which organises the annual festivities, demanded that the government allow immersion like in the past without any restrictions.

It has given a call to all the Ganesh mandap organisers to line up the idols for immersion in Hussain Sagar on the final day, in obvious contravention of the Telangana High Court's orders and subsequent Supreme Court orders last year, prohibiting immersion of idols made of Plaster of Paris (PoP) in Hussain Sagar and other lakes.

The nine-day festivities, which began on August 31 with the installation of thousands of idols, will culminate on September 9 with a massive immersion procession. Idols from various parts of twin cities of Hyderabad and Secunderabad and outskirts are brought to Hussain Sagar for immersion.

As per the orders of both the High Court and the Supreme Court, the authorities have announced that immersion of idols made of PoP will not be allowed in Hussain Sagar and other lakes.

Such idols will have to be immersed in baby/artificial ponds. This year the authorities have built 50 ponds in addition to the 25 already existing for immersion of idols.

The Samiti, however, dismissed the artificial ponds created by authorities as against aHindu Dharma', as the idols should be customarily immersed in only natural water sources.

Telangana High Court on September 9, 2021 directed the state government not to allow immersion of Ganesh idols made of PoP in Hussain Sagar Lake and other lakes in and around Hyderabad.

On a petition filed by the state government, the High Court refused to modify its order. The state government subsequently filed an appeal in the Supreme Court. The apex court allowed immersion of PoP idols for one last time.

The court directed the government to permit immersion of PoP Ganesh idols in baby ponds constructed by the Greater Hyderabad Municipal Corporation (GHMC) or separate areas/ponds which do not result in the spread of pollution into the main water body.

The High Court reiterated its earlier judgement recently and asked the government to issue orders about alternative arrangements for idols made of PoP.

The Samithi, however, argued that the judgment for the contempt case from 2013 was a fallout of the government's lack of response to the court about the measures taken with regard to an earlier order. According to the Samithi, the earlier order merely said the immersion should be decentralised, and that the remains of the idols and other debris have to be removed and recycled.

Bhagavanth Rao cited a report by Environment Protection Training and Research Institute (EPTRI) which said PoP idols are not affected even after 10 days of contact with water, and that large idols can be safely withdrawn from the lake after immersion.

The Samithi also argued that the High Court did not issue any directions to it, and there is no ban on the PoP idols. Bhagavanth Rao demanded that the government should take initiative to remove the hurdles for immersion as the Kerala government had done in case of Sabarimala verdict and Tamil Nadu government in case of Jallikattu.