100 MLAs, MPs to be part of TRS campaign in Munugode 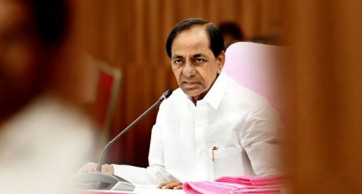 Hyderabad, Sep 5 (IANS) Telangana Rashtra Samithi (TRS) will be going all out to wrest Munugode Assembly seat in the impending by-election caused by the resignation of sitting MLA of Congress party.

The ruling party plans to launch its poll campaign from September 15 in the constituency, which is likely to witness a bitter triangular fight.

Treating it as a battle of prestige, the TRS will be leaving no stone unturned to achieve Mission Munugode to stop the Bharatiya Janata Party (BJP) from winning another by-election.

After wresting Dubbak and Huzurabad from TRS in 2020 and 2021 respectively, the BJP is keen to score a hat-trick of by-poll victories. The contest in Munugode is being see as a semi-final by the major players ahead of the next year's Assembly elections.

The seat fell vacant with the resignation of Komatireddy Rajagopal Reddy, who has switched loyalties to the BJP. He formally joined the BJP at a public meeting addressed by union home minister Amit Shah in Munugode on August 21.

Chief Minister and TRS president K. Chandrasekhar Rao, who addressed a public meeting in the constituency a day before BJP's rally, has entrusted the responsibility of the TRS campaign to 100 MLAs, MLCs and MPs.

These leaders will hit the campaign trail from September 15. The party has prepared a '50-day action plan'.

The party will rope in 1,500 leaders and workers for the intensive campaign covering all the mandals, villages, and municipalities over the next 50 days.

The TRS expects that the Election Commission of India (ECI) will announce poll notification by the end of September and by-election will be held by October-end.

KCR, as Rao is popularly known, already held a meeting with TRS leaders from united Nalgonda district to chalk out the party's strategy.

The MLAs, MLCs and other leaders will work under energy minister G. Jagadish Reddy, who will be incharge for the party's campaign in Munugode.

Each MLA is likely to be entrusted with the responsibility of carrying out the party campaign in two villages. As many as 88 MLAs are likely to camp in the constituency.

The ruling party has a strength of 103 MLAs, 36 MLCs and 17 MPs. Services of at least 100 of them will be utilized for the campaign. They will be given the responsibility of campaigning in 100 units (villages or wards).

Every MLA, MLC and MP is likely to bring 15 party members to Munugode for the campaign at field level. They will go door-to-door interact with voters and beneficiaries of various schemes of the state government. The leaders will also distribute the assistance under different schemes.

Like Congress, the TRS has also not yet announced its candidate for the by-election. The ruling party's focus on Munugode is significant in the wake of BJP stepping up its efforts to capture power in the state.

The saffron party will be looking to repeat the success of Dubbak and Huzurabad by-elections to consolidate its position in the run-up to 2023 polls.

After failing to retain Huzurnagar seat in 2019 and wrest Nagarjuna Sagar from TRS last year, the Congress party is also desperate for a win.

The by-election in Huzurnagar was caused by the resignation of Uttam Kumar Reddy after he was elected to Lok Sabha in 2019 while Nagarjuna Sagar seat fell vacant after the demise of a sitting legislator of TRS. Both the seats were won by the TRS.

The Congress party, which lost a dozen MLAs to TRS after 2018 elections, fared badly in the by-elections for Dubbak and Huzurabad, which were wrested by BJP from TRS.

BJP's Raghunandan Rao had won Dubbak in 2020 by a narrow margin of 1,079 votes against TRS candidate S. Sujatha, widow of S. Ramalinga Reddy whose death had caused the bypoll.

This victory gave new confidence to the BJP, which had won just one seat in the 119-member Assembly in the 2018 elections.

The BJP received a shot in the arm after Eatala Rajender joined its rank after he was dropped from the state Cabinet by KCR following allegations that he encroached lands of some farmers. Rajender resigned from the Huzurabad seat and contested the by-election as BJP candidate.

Riding on the popularity of Rajender in the constituency, BJP won the by-election, dealing a big blow to TRS.

BJP now hopes that like Rajender, Rajagopal Reddy will give the party a big victory in Munugode to bolster its prospects in the next year's elections.

Given the significance of the by-election for their Mission 2023, the saffron party is likely to rope in top Central leaders. The conduct of the party's national executive in Hyderabad in July and a massive public meeting addressed by Prime Minister Narendra Modi, Amit Shah, BJP President J.P. Nadda has already boosted the morale of BJP cadres in the state.