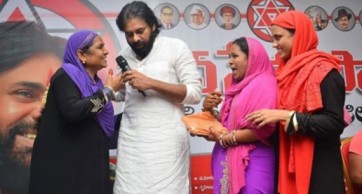 The Jana Sena Party leader took to Twitter to accept the challenge and posted his pictures wearing handloom.

He wrote that he was accepting "Ram Bhai's challenge accepted... 'cause of my love & admiration for our weaver communities".

Earlier, Rama Rao had accepted the challenge of his Cabinet colleague V. Srinivas Goud and posted pictures with handlooms.

KTR wrote that he had been wearing handlooms every week and actively promoting it. He nominated industrialist Anand Mahindra, former cricketer Sachin Tendulkar and Pawan Kalyan for the challenge.

Meanwhile, KTR wished weavers on national handloom day. He once again appealed to the Government of India to review and revoke its 'unwise' decision to impose GST on handlooms.

"This dying art needs our utmost support," he tweeted.