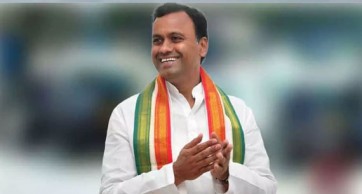 Hyderabad, July 30 (IANS) Komatireddy Rajagopal Reddy, a rebel Congress MLA from Telangana, appears to have finally made up his mind to switch his loyalties to the BJP.

A member of Telangana Legislative Assembly from Munugode, he made it clear that his resignation and the by-election are certain.

Though senior Congress leader Digvijaya Singh, on the direction of the Congress leadership, had invited Reddy to New Delhi for talks, the rebel MLA ignored the invite and late Friday night issued a statement.

Rajagopal Reddy announced that he would be sounding the war bugle against the "corrupt and family rule" of Chief Minister K. Chandrasekhar Rao.

He vowed to liberate the state from the clutches of Telangana Rashtra Samithi (TRS) and the KCR family, who he alleged to have amassed massive wealth and pushed the state into a debt spiral.

Rajagopal Reddy said he would not compromise on his mission to free Telangana from the misrule and corruption of TRS.

Responding to allegations against him, he said his aim was not to serve his own interests.

In a clear hint that he will soon be joining the BJP, the rebel MLA said his decision was being welcomed by all including the people of Munugode.

The legislator said the efforts to form a people's government would begin from Munugode.

He declared that the next elections would be between the Pandavas and Kouravas, and that the Chief Minister and his "money-distributing army" will face defeat.

He also accused KCR of deliberately ignoring development of Munugode ever since he was elected from there. He alleged that the government was deliberately not completing the SLBC and Brahmana Vellamla projects.

"I had said last year itself that I was ready to resign from my post, if the State government worked to fulfil the aspirations of Dalits, STs, BCs, minorities and other sections. I'm not someone who goes back on his words," Rajagopal wrote.

Ever since his meeting with Union Home minister Amit Shah a few days ago, Rajagopal Reddy stepped up attacks on the Congress party.

He stated that only BJP is capable of defeating TRS.

He had also remarked that if summoned by the Enforcement Directorate (ED), party leaders Sonia Gandhi and Rahul Gandhi should appear before it.

The Central leadership of the Congress party took serious note of his remarks but avoided taking any strong action. The leadership had asked Digvijay Singh to hold talks with Rajagopal Reddy to persuade him to stay in the party.

However, by avoiding the meeting he has sent clear signals that he will quit Congress and join BJP.

Though the MLA had been making bitter attack on the party, the leadership was handling the issue carefully in view of the fact that his brother Komatireddy Venkat Reddy is a MP in the party.

The CLP leader, however, failed in his efforts.