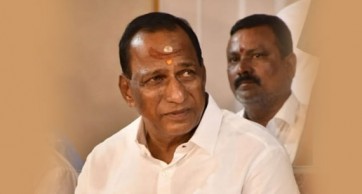 Hyderabad, July (IANS) Telangana's Labour Minister Malla Reddy on Thursday said he has nothing to do with the MLA sticker found on the car of Madhav Reddy, a casino dealer whose residence was searched by the Enforcement Directorate (ED).

A sticker issued to Malla Reddy was found on the car of Madhav Reddy on Wednesday and this became a topic of discussion in political circles.

When the minister was asked about this, he said the sticker was issued in March and the same was removed from his vehicle and thrown away three months back. "Somebody may have picked up that sticker and pasted it on his car. I have nothing to do with this," he said.

Madhav Reddy's house in Bowenpally was searched by the ED along with some other places belonging to him and Praveen Chikoti in Telangana for alleged violation of the Foreign Exchange Management Act (FEMA).

Madhav Reddy is said to be a partner of Chikoti. They had allegedly taken punters from the two Telugu states to a casino organised in a hotel in Nepal in June and organised high stakes gambling.

The ED carried out searches at Chikoti's house at IS Sadan in Hyderabad and farmhouse at Kadthal on the city outskirts.

The duo are suspected to have facilitated the transfer of the stakes at the casino, running into lakhs of rupees, through hawala channels.

Both of them have been summoned by the ED for questioning. Sources said based on their statements, others may also be summoned.