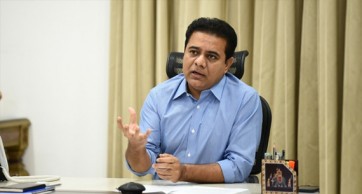 Hyderabad, April 9 (IANS) Reacting to Home Minister Amit Shah's statement that Hindi should be accepted as an alternative to English, and not local languages, Telangana Rashtra Samithi (TRS) working president K.T. Rama Rao on Saturday warned that language chauvinism and hegemony in the country will boomerang.

Highlighting unity in diversity as India's strength, KTR, as Rama Rao is popularly known, tweeted: "India is a union of states and a true 'Vasudhaika Kutumbam'. Why don't we let people of our great nation decide what to eat, what to wear, who to pray to and what language to speak! Language chauvinism/hegemony will boomerang.

"I am an Indian first, a proud Telugu and Telanganaite next. Can speak in my mother tongue Telugu, English, Hindi and a little bit of Urdu too. To impose Hindi and diss English will be a great disservice to the youngsters of this nation who have global aspirations. #stopHindiImposition."

This is the first reaction by a leader from the two Telugu states to Shah's statement.

Leaders from Tamil Nadu, Karnataka and other non-Hindi speaking states have already reacted strongly to the Home Minister's statement saying they will not accept Hindi imposition.