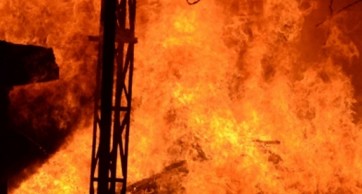 Hyderabad, June 10 (IANS) A house was destroyed when an electric bike caught fire while it was kept on charging in Telangana's Siddipet district.

There were no casualties. The incident occurred in Chikoda village of Dubbaka mandal in the early hours of June 8.

Lakshmi Narayana, who had purchased a bike about six months ago, had parked it at his neighbour's house and kept in on charging before going to bed.

He woke up to the sound of an explosion and came out to see his neighbour's house in flames. The bike reportedly caught fire after the explosion and soon it spread to the entire house, reducing it to ashes.

A tragedy was averted as there was no one in the house. As the house owner Durgaiah lives in Hyderabad, Lakshmi Narayana with his permission had kept few of his belongings there and had also kept the electric vehicle on charging when the mishap occurred.

Laksmi Narayana, who runs a beedi manufacturing unit, had purchased an electric bike six months ago due to increasing prices of fuel.

This is the latest in a series of incidents of electric bikes going up in flames while charging.

An electric bike burst into flames in Hyderabad on May 11. There were no casualties.

A man was killed and three others injured when the battery of an electric two-wheeler exploded in their house at Vijayawada in Andhra Pradesh on April 23.

Earlier on April 19, an 80-year-old died and two others injured when an electric bike kept on charging burst into flames when they were asleep at their house in Telangana's Nizamabad town.

Concerned over the increasing incidents of electric two-wheelers catching fire, the Centre recently formed an expert panel to inquire into the matter.

Union transport minister Nitin Gadkari said in April that action will be taken against those companies found guilty of negligence. He also said that a recall of all defective vehicles will be ordered after receiving the report from the expert committee.