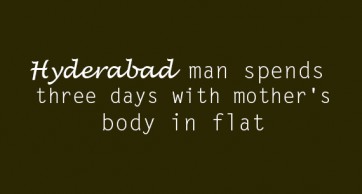 Hyderabad, May 14 (IANS) A 22-year-old man, who is said to be mentally unsound, spent three days with the body of his mother at their flat in an apartment building in Hyderabad.

Police found the body of the woman in a decomposed state after neighbours alerted them about the foul smell emanating from the flat.

Police shifted the body of Vijaya (50) for autopsy and detained her son for questioning.

The incident came to light on Saturday under the limits of Malkajgiri police station in Telangana's Medchal Malkajgiri district.

Locals suspect that the youth murdered her mother. According to them, there used to be frequent quarrels between them.

Police registered a case of death under suspicious circumstances and took up further investigation.