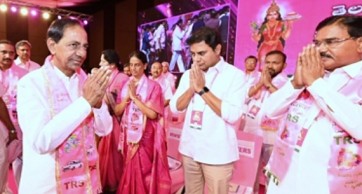 TRS president and Chief Minister K. Chandrasekhar Rao led the party in celebrating the occasion with the hoisting of party flag at the party plenary.

The TRS chief paid floral tributes to Telangana thalli or mother Telangana. Speaking on the occasion, he termed TRS the "asset" of Telangana people.

He said that TRS which is entering 22nd year of its existence remain the only force which is working for the self-respect of Telangana and striving to safeguard the interests of people of Telangana.

As many as 3,000 party leaders including state ministers, MPs, state legislators and other public representatives are attending the day-long meeting, which is expected to lay down the roadmap to score a hat-trick of electoral victories inA in the 2023 Assembly polls.

The plenary will discuss 11 issues and pass resolutions. Finance minister Harish Rao said the Centre's discrimination against Telangana and the failures of Narendra Modi government on all fronts are the issues to be discussed in the plenary.

KCR is also likely to give clarity on national alternative he proposes to forge.

The foundation day celebrations were organised on a grand scale at Telangana Bhavan, the TRS headquarters. TRS working president K. T. Rama Rao hoisted the part flag. He garlanded statue of Telangana thalli and also cut a cake on the occasion. A 40-feet flag of the party was specially prepared for the celebration.

TRS foundation day celebrations were also held across the state.

The party cadres hoisted the party flag in all towns and villages.

According to TRS leaders, party's village presidents will hoist the party flag in all 12,769 villages. Similarly, there will be flag-hoisting in 3,600 towns.

This is after a gap of two years that TRS will be holding foundation celebrations on a grand scale. For the last two years, the celebrations were low-key due to Covid-19 pandemic.

In October last year, the party held its plenary at HICC. KCR was re-elected as party president.

KCR floated the TRS on April 27, 2001 to revive the movement for separate state.

After the formation of Telangana in 2014, he has been heading both the government and the party.