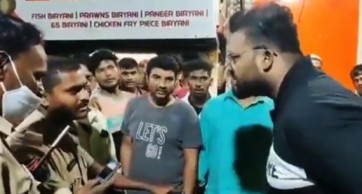 Hyderabad, April 6 (IANS) Hyderabad police on Wednesday booked a corporator after he was caught on camera using objectionable language against policemen on duty and threatening them.

Ghouseuddin Mohammed, a corporator of Greater Hyderabad Municipal Corporation (GHMC) from Bholakpur division has been booked for obstructing police personnel on duty and for criminal intimidation.

The coporator belonging to All India Majlis-e-Ittehadul Muslimeen (AIMIM) entered into an argument with police personnel and behaved rudely with them for trying to close down shops which were open past midnight in Bholakpur under the limits of Musheerabad police station.

The video of the incident which occurred in the early hours of April 5 went viral on social media, evoking strong reaction from some netizens.

Ghouseuddin pulled up the policemen for forcing closure of shops despite permission to keep the shops open till late hours in view of Ramzan.

"This won't work in my area. Do your duty and leave...You were told not to come to this area for this entire month," the corporator is heard telling the police constables.

The corporator called one of the police constables as 'sau rupaye ka aadmi' or a person who receives petty bribes.

The issue was reportedly sorted out after Ghouseuddin went to the police station on Tuesday and apologised to the constables.

However, as the video went viral and with demands being made by netizens to take action against those who obstructed police officers, state minister for municipal administration and urban development K. T. Rama Rao on Wednesday asked Director General of Police M. Mahender Reddy to 'take stern action against the individuals who obstructed police officers on duty'. "No such nonsense should be tolerated in Telangana irrespective of political affiliations," Rama Rao tweeted.

After KTR's tweet, police registered a case against corporator under sections 353 (assault or criminal force to deter public servant from discharge of his duty) and 506 (criminal intimidation) of the Indian Police Code.

BJP MLA Raja Singh had also tweeted on the incident. He posted: "A clear warning to @hydcitypolice not to enter his area for the next 30 days & abusing the officers on duty. Too much freedom leads to this."

"The video is from the Musheerabad area of Hyderabad city, @CPHydCity can we expect some action against such people.
@TelanganaDGP," he posted.